An Elder Scrolls roleplay site based during the late fourth era.

User:Guest Date/Time:22/01/20, 03:00 am Last Visit: Total Posts:0
The site is up and running again. Hope to see you back!
Always looking for new members. Got any ideas to improve the site?

Bio: Silver-Tongue's interesting life started off in High Rock. His adventures there lead him to be the hero of Daggerfall known as The Agent. After those events, Silver left High Rock and stayed in Morrowind during the Nerevar's return. During that time he worked for the Imperial Army. On one of his missions, he got stuck behind a cave in and was left for dead, no attempt at rescue was made. In the cave was a statue shrine to Sheogorath. After seven days, Sheogorath showed himself to Silver and made a deal. He let Silver out of the cave as long as he became an avid follower of Sheogorath. This was the point when Silver became obsessed with pie. A few years later, Sheogorath was so impressed with Silver, he offered Silver the chance to become a Demi God. Silver happily agreed. (He can still die like a normal being, just not from old age.) During the Oblivion crisis, Silver was revisiting his home in Black Marsh. Three Hundred years after that he left for Skyrim to put down his sword and start life over again. (Also: Silver-Tomgue got his name from the fact that he loves to talk to people but most of the time says the wrong things. An ironic name. It's been so long that he forgot his original name.) 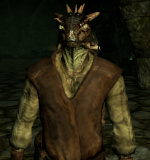